HGV Permit Checker App: Citizens empowered to check in real-time if 5+ axle vehicles have a valid permit to be in the city.

The Dublin City Council HGV Management Strategy was introduced in 2007, shortly after the opening of the Dublin Port Tunnel. The HGV Strategy provides for a ban on 5+ axle vehicles during the hours of 07.00-19.00 seven days a week from a designated cordon area (roughly between the canals), and provides a limited permit scheme for HGVs that need to load/unload within the city centre area. The strategy encourages maximum use of the port tunnel by port-related traffic, reducing traffic congestion in the city-centre and improving air quality and the environment. 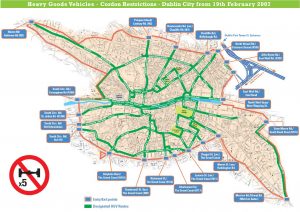 The HGV cordon has been very successful over the past 12 years, reducing the numbers of 5+ axle vehicles on routes in the cordon area by between 80 and 94 percent since 2007. While this reduction is a significant success, some HGVs still need to load and unload within the city centre.  DCC issues an average of 80 permits a day allowing for these deliveries, and HGV drivers who enter the designated cordon without a permit are subject to fines.

The app was developed as part of  BE-GOOD (Building an Ecosystem to Generate Opportunities in Open Data)project, an EU NWE (North West Europe) INTERREG initiative, which is a pioneering project to unlock, re-use and extract value from PSI (Public Sector Information) and develop innovative data-driven services in the area of infrastructure and environment.

An important aspect of this initiative was the collaboration between the international partners in the BE-GOOD project to establish transnational links between this project and other projects and stimulate economic activity in the areas of open data for environment and transportation services with in the public sector.

The public are invited to download the free The HGV Permit Checker app to their smartphone (Google Play store for Android and App Store for iOS) and if they spot a 5+ axle vehicle they can check in real time if it has a valid permit to be in the city. Users enter the registration number of the vehicle and share the location via the map. If the app reports that the vehicle in question has no permit, the information is logged and used for enforcement. 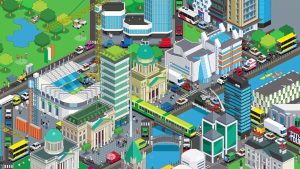 Balbriggan is designated as a ‘self-sustaining town’ in the new Eastern and Midland Regional Assembly (EMRA,) Regional Spatial and Economic Strategy (RSES) 2019-2031. This is defined as a...