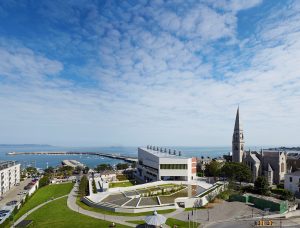 About the Smart Projects

The Smart Sandyford programme seeks to develop Sandyford as a ‘smart district’, defined by engaging the district’s commercial, public and private communities; implementation of appropriate IT-dependent strategic initiatives; and actively encouraging entrepreneurial activity. The programme will support the vision of the Sandyford Business Improvement District (SBID):

The goal of the Online Grants Management project is to switch from the current paper based system of community grant applications to an online, paperless system. This switch will ultimately benefit both service users (applicants) and dlr staff. The online system is expected to optimise the application process for users by automating aspects of the process such as; those associated with user profiles, total expenditure calculation and is also expected to increase the accessibility of the application process to a wider audience.

“I would like to congratulate all those involved in the Dún Laoghaire-Rathdown County Council on being shortlisted for seven Awards in the Chambers Ireland Excellence in Local Government Awards. Being shortlisted for the national Awards demonstrate this Councils commitment to excellence and innovation in service delivery.”

The Excellence in Local Government Awards are held in association with Chambers Ireland and the Department of Housing, Planning and Local Government. The winners will be announced at the 16th Annual awards ceremony 28 November 2019.

Further information on the awards can be found at https://www.chambers.ie/events/elg-awards/

Smart Dublin and City Possible, organised a MaaS Gap Analysis Workshop in March in Dublin, Ireland, where a select number of local MaaS stakeholders participated in identifying the characteristics...

Join us for the webinar launch of Dublin’s newest Smart District “Smart Balbriggan”.

We’re delighted to announce the launch of Dublin’s newest Smart District “Smart Balbriggan”. Join us for the webinar launch, Thursday June 25th 10am to 11am   Register...