Dublin’s Liberty Bell is heading to the Rockies

Liberty Bell, a smart bicycle bell developed by Fluidedge, one of the companies participating in the Smart Dublin cycling challenge, has won an international US technology challenge run by the Colorado Department of Transport (CDOT).

The CDOT Bicycle and Pedestrian Challenge called for inventive technological solutions that would help to increase safety for cyclists and pedestrians, two groups which account for 12% of all road accident fatalities across the state, each year.

As one of the winners of this open competition, Liberty Bell will receive an initial funding allocation of USD75,000 to facilitate deployment of its smart bell solution in the City of Boulder.

The Liberty Bell was designed in response to Smart Dublin’s cycling challenge and is a smart Bluetooth bicycle bell and auditing system which allows city authorities gather real-time insights into the experience of cycling in their city. 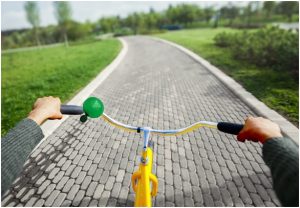 “One of the greatest barriers to cycling in Dublin is the perception of feeling unsafe as well as being unsafe”, says Conor Cahill of Fluidedge. “We realised that it was important to understand the issues encountered by cyclists, while they were cycling. Given that it is difficult to interview someone on a bike, we needed a simple way to record and log issues that cyclists encountered. Liberty Bell is essentially a field research tool to gather qualitative data about the cycling experience.”

“Cities need a useful, cost-effective auditing system in order to understand and improve the cycling landscape of a city”, says Síle Ginnane. “That Boulder, Colorado, which is one of five Platinum-standard Bicycling Friendly Communities in the USA, has embraced Liberty Bell and sees its value in improving their city for cyclists, is further validation.”

Announcement of winners of phase 1 of cycling challenge

Announcement of winners of phase 2 of cycling challenge

Smart Dublin and City Possible, organised a MaaS Gap Analysis Workshop in March in Dublin, Ireland, where a select number of local MaaS stakeholders participated in identifying the characteristics...

Join us for the webinar launch of Dublin’s newest Smart District “Smart Balbriggan”.

We’re delighted to announce the launch of Dublin’s newest Smart District “Smart Balbriggan”. Join us for the webinar launch, Thursday June 25th 10am to 11am   Register...